This is Scientific American's 60-second Science, I'm Steve Mirsky.
"In the early years of the development of gunpowder, it was known as the devil's distillate because of its seemingly sinister properties. So where do those properties come from? Well, they come from the three principal ingredients of gunpowder, which are sulfur, charcoal and saltpeter: three naturally occurring materials, which, when combined, produce something much greater than the sum of their parts."
Stephen Ressler. He served 34 years in the U.S. Army Corps of Engineers and retired as a brigadier general. He spoke at sea onboard a Scientific American cruise August 17, off the coast of Scotland. His subject was how fortifications had to evolve once gunpowder was widely in use. Ressler revealed a little basic chemistry about the constituents of gunpowder and how they are represented in a familiar uniform.
"Sulfur, a mineral found in nature, yellowish or golden color, burns at a relatively low temperature. And that made it a material of intense interest in the Middle Ages, where alchemists were constantly looking for magical properties of materials. Sulfur seemed to be one of those materials that had magical properties because it was a stone that burned, and it burned at relatively low temperature." 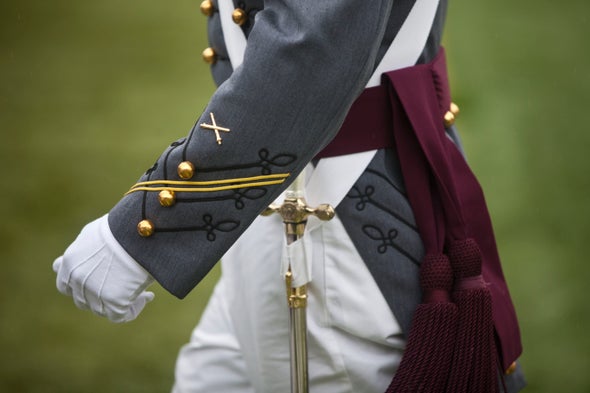 "Charcoal, the product of the combustion of wood, typically hardwood, in an oxygen-starved environment produces pure carbon. But not just any old pure carbon, pure carbon with a very fine microscopic, latticelike structure that actually turns out to be absolutely essential to the functioning of gunpowder."
"And then, finally, the third and, really, i﻿n many ways, the most important ingredient in gunpowder—and that's saltpeter. The chemical composition is actually potassium nitrate. And it's a waste product of decomposing organic matter. That's all it is. It's a white material that appears on the surface of fermenting organic material—and turns out to be the absolutely essential ingredient in gunpowder."
"Okay, I have to pause for a totally unrelated diversion, because sulfur, charcoal and saltpeter have great personal significance to me above and beyond the fact that they are constituent materials of gunpowder. And that is they form the basis for the school colors of my alma mater, the U.S. Military Academy at West Point. Black, gray and gold, the school colors, are explicitly defined as the three materials of gunpowder. Black charcoal, gray is saltpeter and gold is the sulfur. So the next time you see that inevitable video on the evening news of the graduation at West Point and all the cadets throwing their hats up in the air, think about gunpowder. Because that's what the black, gray and the gold are meant to signify."
For Scientific American — 60-Second Science. I'm Steve Mirsky.