The benefits of humor as an individual coping mechanism and a social lubricant are well established. Humor helps people cope with pain and tragedy, reduces social conflict and promotes group cohesion. But Lehmann-Willenbrock and Allen explored whether humor in the workplace might also help a corporation boost its bottom line. In a longitudinal investigation of team efficiency and productivity, they evaluated humor patterns in the regular team meetings of two industrial organizations in Germany, and then examined short-term and long-term outcomes.

To assess humor patterns, Lehmann-Willenbrock and Allen first videotaped 54 different team meetings, each roughly forty-five minutes long, that collectively involved over 350 employees. If you find work meetings to be arduous and dull, you would not want to be on this research team, for the investigators then watched all of those meeting tapes and coded the team interactions. They were particularly interested in positive humor patterns, that is, upbeat, funny remarks followed by laughter. They intentionally did not include negative humor (sarcasm, put-downs) or failed humor (e.g., a joke followed by silence). After coding the humor patterns, they then evaluated what happened after the laughter.

Lehmann-Willenbrock and Allen found that within the meetings, humor patterns triggered problem-solving behaviors (e.g., what do you think about this approach?), procedural suggestions (e.g., let's talk about our next step), and goal orientation (e.g., we should target this issue). Humor patterns also promoted supportive behaviors like praise and encouragement, and led to new ideas and solutions. 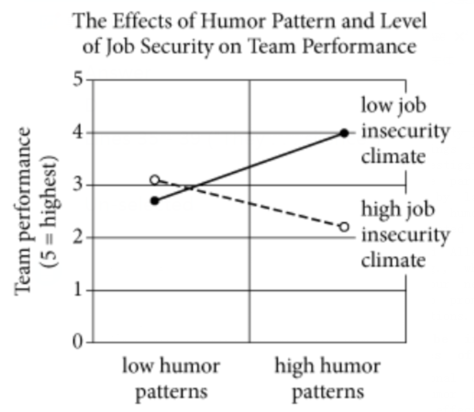 A.considered international differences in workplace humor.
B.explored negative humor patterns as well as positive ones.
C.focused on humor's effect on the achievements of groups of people.
D.investigated the way humor affects people's responses to challenging situations.